Wheelchair soccer, known as wheelchair football outside of the U.S., is a fun, exciting adaptive version of the international sport of the same name. This popular wheelchair sport is regulated by the Federation Internationale de Powerchair Football Association or FIPFA (fipfa.org).

With broad appeal to all ages, the energizing game is usually played using electric-powered wheelchairs to help increase speed and competitiveness. Wheelchairs are modified by adding a half-circle, protective grill in front of the foot rest area.

Players then use this grill to hit the ball and move it down the field to score field goals. There's no need for any other type of special protective equipment, as only the foot area is used and this is already protected by the grill guard.

The soccer game is usually played indoors, in a standard 94-foot by 50-foot basketball court. Players use an average 13-inch soccer ball during official games, although larger soccer balls are often used for recreation and other league play.

Each team consists of three field players plus a goalkeeper. There's no limit to the number of substitutions that can be made during the game. Team members only require the ability to propel their mobility chairs in some way; they do not need to use their arms, hands or legs to play wheelchair soccer. 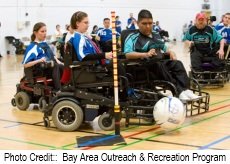 Goalkeepers can use their arms and hands to stop the ball, but those who don't have full use of their upper extremities can block the ball using their bodies or chairs. Play runs 40 minutes, divided into two 20-minute halves. There's typically a 10-minute break in between the halves.

Players kick or push the ball into the net to score. Once the ball crosses the goal line, the point is scored. Players can block opponents by using the bumper of the wheelchair. No use of hands, no pushing and no chair hitting (except using the bumper) is allowed.

There are numerous variations of the game. In some cases, players who have some use of their legs can skip the use of a grill and choose to kick the ball. Whether this is allowed or not depends on the rules of each particular organization or coach.

Some wheelchair soccer programs have a reserves division, in which there is no goalkeeper. Scoring involves moving the ball past the goal line into the net. This division promotes inclusion and enables players with severe physically disabilities to enjoy the sport.

The FIPFA World Cup is held once every four years in different countries around the world. Ten teams compete against each other over the course of four days until a winner is declared.

For more information, visit FIPFA at fipfa.org, the Disability Football Directory at disabilityfootball.co.uk, or the Wheelchair Football Association at thewfa.org.uk.


Back to Mobility Advisor HOME from Wheelchair Soccer

Copyright 2005-2023 - Sowder Group LLC - All rights reserved. Articles and images are copyrighted and may not be reproduced.
Content is for informational purposes only and not for diagnosis or treatment of any kind.

The site publisher/owner is not liable for your use of site information. Please see disclaimer.
Always consult with a medical professional for all health-related issues.

Thank you for visiting Mobility-Advisor.com.